The aim of The Prasanta Banerji Homeopathic Research Foundation (PBHRF) is to offer comprehensive healthcare using Homeopathic medicines as well as establishing it to its rightful position as the medicine of the masses.

Under the guidance of Dr. Pratip Banerji, patients are treated here without any consultation charges. This is done for the purpose of service to the less-than-privileged, as it is common knowledge that India is a developing nation and needs all the charitable service that can be given.

This charitable clinic is an institution by itself. A team of 18 doctors personally trained by Late Dr. Prasanta Banerji & Dr. Pratip Banerji attend to 1000-1200 patients a day.

Pathological tests, CT Scans, MRIs, ECGs, etc. are also financed by the organisation for the aid of underprivileged patients.

For consultation with Dr. Pratip Banerji , please SMS the name of the patient to 9830091190. A confirmation call/message will be reverted back from our clinic. Patients should not come without receiving a confirmation message from us.

The PBHRF: An Introduction

The Dr. Prasanta Banerji Homeopathic Research Foundation (PBHRF) was set up in 1993 with the aim to include Homeopathy as a scientific and effective mode of Alternative Medicine. This Foundation offers comprehensive health care as well as scientific establishment to bring Homeopathy to its rightful position as the medicine of the masses.

In the research foundation the main research activity consists of data recording of the treatment of all cases of various types of cancer and other life threatening diseases such as renal failures, multiple sclerosis etc. treated at the clinics of the research foundation using The Banerji Protocols ™ of treatment utilizing homeopathic medicines. At present our patient database has more than 40,000 cases inputted with over a half a million visits recorded. This data is the epicenter of the PBHRF and makes us attractive for research to premiere institutions throughout the world. This is an ongoing research initiative that has been on since 2002.

The aim of this foundation is to establish Homeopathy as a scientific and effective mode of Medicine. This Foundation offers comprehensive health care as well as scientific establishment to bring Homeopathy to its rightful position as the medicine of the masses.

The research foundation also finances pathological tests for the aid of underprivileged patients, and also for the sake of accuracy in their treatment. 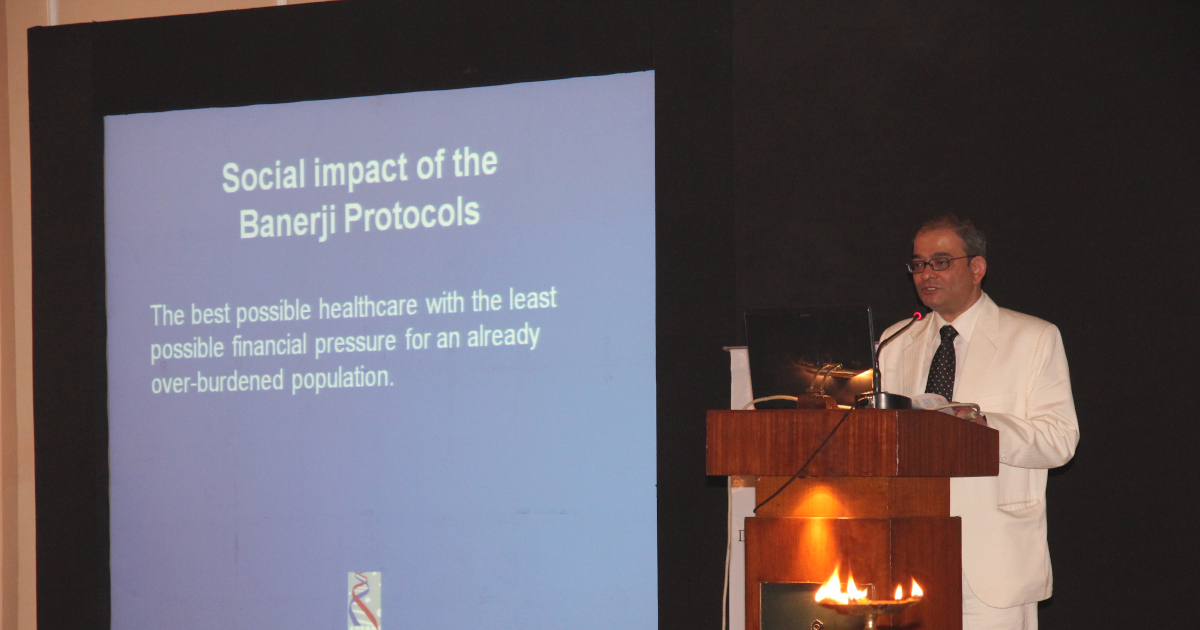 The aim of the PBH Research Foundation is to establish The Banerji Protocols ™ as a scientific and effective mode of medicine. This Foundation offers comprehensive health care as well as gives scientific establishment to bring the treatment form to its rightful position as the medicine of the masses.

The Prasanta Banerji Homeopathic Research Foundation is located in the heart of the busy city of Kolkata, India.

Our team consists of very able, fully qualified assistant physicians – who help Dr. Pratip Banerji to deal with the large volume of patients; office executives and data entry personnel – who are the essential for the documentation and administration of the clinics, medicine compounders - and other staff i.e. cleaners, security etc. Each play their role and are essential to the functioning of the institution.

Since 1993, the Foundation has consciously endeavoured to extend homoeopathic treatment facilities to underprivileged people in rural and semi-urban areas outside Kolkata – by encouraging trained homeopaths attached to the clinic to practice and attend patients on fixed days of the week, during fixed hours in these areas. The opening of these clinics has helped spread awareness about homoeopathy, and also brought proper homoeopathic treatment facilities closer to people, who have really needed them – mainly on account of their low costs. Moreover, patients living in areas near these clinics who earlier used to go to Kolkata for treatment by the Foundation’s homoeopaths, have also been greatly benefited.

Activities of the Research Foundation at a glance

Accreditations of the PBHRF

Our Founder and Inspiration, Dr. Prasanta Banerji, Father-Doctor-Scientist-Philanthropist-Pioneer, has left for his Heavenly abode on the 17th of May 2018.

Known world-wide for establishing 'The Banerji Protocols', his life and work will remain in our Hearts Forever.

Dr. Prasanta Banerji is famed for establishing 'The Banerji Protocol' of treatment. A protocol that has brought lucidity and user friendliness into a treatment form using ultra dilutional medicines. He made the treatment form easy to learn and practice and this has allowed replicability in science. It is due to his sole efforts in this respect, that the modern scientific establishment has recognized and accepted the 'The Banerji Protocols' of treatment using ultra-dilutional medicines into mainstream healthcare.

Dr. Prasanta Banerji is a consultant physician educated at the Mihijam Institute of Homeopathy Medical College and Hospital (MIHMCH), received Institute Fellowship in 1956, runs a clinic having an average daily attendance of 1000-1200 patients, with a team of doctors.

Dr. Prasanta Banerji has been an Honorary Advisor to the Minister of Health and Family Welfare, Government of India, as a member of a key advisory group of experts, and also of an apex committee. Dr. Banerji has also been a Member of the Program Advisory Committee for the National Cancer Control Programme of the Goverment of India's Ministry of Health and Family Welfare.

Dr Pratip Banerji, the fourth generation homeopath in the family, did his post graduation from London College of Classical Homoeopathy. After post graduation, Pratip was invited to appear before the Board of the British Registrar of Complementary Physicians, which he did. Thereafter he received a letter from the Board asking him to give the address of the place where Pratip would like to set up his practice in the UK, so that the Board could refer patients to him. But Pratip returned to India to set up his own practice in Calcutta to follow the footsteps of his father and serve his countrymen. He further completed his Doctor of Medicine (M.D.) from the JRN Rajasthan Vidyapeeth (Deemed University), Udaipur, India.

Keeping in view the family tradition to give medical aid to the under privileged and never to loose contact with one’s grass root, Pratip runs a charitable clinic where patients are treated for free. The charitable clinic is an institution by itself, especially in a developing country like India where 90% of the population is below the poverty line.